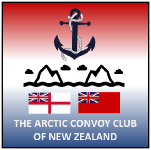 Russian convoys were a different kettle of fish. I took part in Convoy PQ 6 which departed Hvalfjiord on 8 December 1941 consisting of eight ships. At that time I was on board SS Elona, a tanker of 6,192 tons. We arrived in Molotovsk just before Christmas having been stuck in the ice and rescued by a Russian icebreaker. As we were leaving in March, with a Russian minesweeper ahead of us in the narrow channel, there was a mighty explosion as he set off a mine. He probably saved us from being mined ourselves.

From there we went to Murmansk to form a convoy. A small Russian vessel, with a blue light, was supposed to guide us. It did, but we lost him in a blizzard. Unfortunately we hit an obstruction and water poured into the wing tanks. We could cope with that, with cargo pumps, as the centre tanks were always filled with ballast. The Russians came and filled all the gaps with a bitumastic cement which lasted until we reached England. I heard later that about 80 bottom plates had been removed - a lot of damage.

After we reached Murmansk we were in the saloon one evening when there was a loud explosion. We rushed out on deck but had suffered no damage but when morning came we found a piece of land-mine a metre across on the deck. It was sent ashore to be identified. A German plane had been over that day reconnoitring ships in the anchorage. The next day they came over again, this time three bombers each with a stick of four bombs. The first plane straddled us, two bombs each side. The second plane straddled us amidships and the third did the same up near the bow. That was the closest attack I had during the war.

We departed Murmansk on 1 March 1942 as part of QP8, a convoy of 15 ships reaching Reykjavik on 11 March. One ship, the Russian Ijora, was lost, sunk by the German destroyer Friedrich Ihn.

Editor's note: U25 was later lost around 1 August 1940 in the North Sea after hitting a British mine. There were no survivors. By this time the Captain had left the ship and survived the war, dying in 1950. During his career he sank 35 ships totalling 180,073 gross registered tons .

I was 21 when WW2 started and served throughout as an officer in the Merchant Navy and the Royal Fleet Auxiliary. My earliest experience of danger was in December 1939 when we were part of an unescorted convoy (OG 16) consisting of 13 ships. We were bound for Basra out of Southampton. The ship next to us, SS Armanistan, was torpedoed by U25 (KrvKpt Viktor Schutze, Knights Cross) on 3 February 1940 west of the River Tagus (Portugal) carrying 8,300 tons of general cargo including sugar and iron rails. She started to settle by the stern and disappeared bow up in no time. Fortunately all the crew were saved by the Spanish merchantman Monte Abril and were landed at Tenerife. The Commodore broke radio silence to call Gibraltar and we awoke next morning to see a couple of Royal Navy destroyers escorting us. Luckily the U-boat left us alone after his success and no further ships were lost. At the time I was on board M.V. Cardium, a Shell International tanker of 8,236 tons built in 1931.

After this I spent the whole of 1940 sailing around the Indian Ocean where German Armed Merchant Cruisers (AMCs) operated. On one arrival at Aden the authorities were surprised to see us, apparently an AMC had been following us. All our ships carried thousands of tons of petroleum products, a frightful source of danger, because when bombed or torpedoed, not only was the ship a blazing inferno but the sea around was on fire too. There was no chance of escape.

Frank Roe passed away on 9 September 2012