It’s 25 May 1943 and having just arrived from Workington, I'm in the recruiting centre in Carlisle with three others -  two from Kendal and one from Carlisle. We're all wondering what we’d let ourselves in for. My father’s last words as he saw me off still ringing in my ears "beware of loose women".

I was 17 years old. We were given a travel warrant - Carlisle to Fareham - leaving on the 8.35pm train arriving Euston at 5.33am., cross over to Waterloo by underground, catch the 7.27 am and arrive Fareham 9.59 am. Report to Naval Patrol for transport to HMS Collingwood.

After being given an official number, photographed etc. for our pay book we were assigned a hut '5X Maintop Div.'. Others arrived during the day, all from the London area, about 28 in total. The next few days were taken up with uniform issue and kit, marking the same and learning how to sling a hammock. Unfortunately our travelling companion from Carlisle was sent home as he had lied about his age. Two or three weeks into our training a lone German bomber, probably lightening his load before heading home dropped one bomb which landed on a hut in the row next but one to ours killing 30 recruits and injuring over 60. Also killed was a Chief Petty Officer who had apparently got out of bed to see what was going on.

No-one seemed to know what to do with us on arrival not having had Plot Control ratings before so they put us in a General Mess. It was quite a secretive affair at the time, we didn’t have a badge and were told to wear a W/T badge. We were given Action Stations firstly on the twin 4 inch H/A AA guns but I wasn’t tall enough to lift the shells out of the locker so was transferred onto loading magazines on the twin Oerlikons.

Some semblance of lateral thinking came when they realised it was rather stupid having us on guns when, in an air raid, we should have been in the Fighter Direction Office doing what we’d been trained to do, supervised by the Fighter Direction Officer, Lt. (later Lt/Cmndr) Allday. The trip from Rosyth to Scapa Flow was my first time on the water since having a row on Derwent Water.

Our first trip in anger was as covering force for Arctic convoy JW57. It was a memorable sight arriving in Akureyri (Iceland), the city lights reflecting in the snow, especially after three years of blackouts in the UK. The same couldn’t be said for the weather, 60 ft waves and howling winds, with the ship shuddering as it ploughed through the rollers. Luckily I was never seasick. I don’t recall it ever being so bad again.

The crew of HMS Berwick in Halifax, Nova Scotia during the period the ship escorted RMS Queen Mary, 1944.

Sometime during 1944 the plot control and radar sections were amalgamated. Standing out during my three and a half years in the RN would be the escorting of the RMS Queen Mary, with prime minister Winston Churchill on board, to Halifax, Nova Scotia with the Atlantic as calm as a mill pond. We made 32.5 knots all the way there and back. The liberation of Trondheim with Royal Canadian Navy destroyers HMCS Haida and HMCS Huron leading the way down the fiord was very emotional. I recall the first church service in Trondheim Cathedral after liberation, the boredom of the Fleet anchorage at Scapa Flow.

A short spell in HMS Euroclydon, which I understand had been a womens' prison pre-war, was followed by a draft to HMS Circe, a minesweeper in the 12th Flotilla, somewhere in Italy. Three of us boarded an LCT in Sliema Creek and proceeded north calling at Naples and Bastia (Corsica) before being landed at Leghorn where we were billeted in an Italian naval barracks. Two false starts later, one on a Newfoundland Navy ocean going tug then an MGB we were finally picked up by HMS Stormcloud who was on her way to join the 12th for their sweeping operations out of Genoa and finally boarded Circe.

Life was reasonably good here. The rate of exchange had skyrocketed, we could buy a dozen eggs for a small bar of chocolate. As it was canteen messing we could buy whatever we wanted for our meals. It was here I suffered the most frightening event of my life. I was sent up the mast by a masochistic Petty Officer with a pot of paint and a brush and told to paint the yardarm. Sitting astride the yard, clinging to the stay wire like grim death while being urged to get further out all the while the funnel belching smoke. I guess it was an early form of “Outward Bound”.

Norwegian soldiers on board HMS Berwick 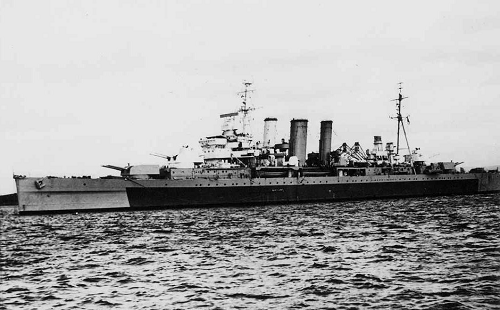 Eight weeks of seamanship training and square bashing was followed by two weeks of gunnery training. When asked what we wanted to do I opted for motor mechanic training but after transfer to a camp in Belmont Park, I was told that there were too many doing the course so it was back to barracks for me . Drafted then to a camp at Stockheath where I and several others were put into "Fighter Patrol" given khaki battledress and did little else all day except PT, unarmed combat with a former all-in wrestler, football and practising the use of Sten guns .

Following a Tannoy request for volunteers for "something secret" we were sent to HMS Heron, the Naval Air Station at Yeovilton in Somerset where we passed out after four weeks as Plot Control ratings 3rd.class. After the initial training at HMS Collingwood in Fareham, and the four week course in Plot Control at HMS Heron, I and three other would-be matelots caught the overnight train to Rosyth and joined our ship HMS Berwick which was in dry dock at the time. The three others were Vic. Cooper from Orsett in Essex, “Ginger” Thomson from London and “Tommo” Thomas from Surrey. 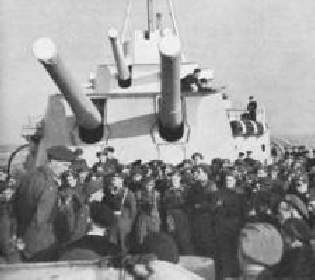 After leaving Berwick it was back to HMS Collingwood on 24 July 1945, then to HMS Valkyrie at Douglas on the Isle of Man to do an RP2 course. Our billets were a row of boarding houses on the Esplanade. Twice a day we had to march up to the radar school on Douglas Head. This part of the course was eight weeks and included VJ day. From the IOM to HMS Heron again for four weeks doing Plotting, Navigation and the use of anti-submarine plotting tables. One week at HMS Dryad at Southwick nr. Portsmouth was next where there were mock-ups of ships' anti-aircraft plots.

Back to Collingwood where on 21 October 1945 I got a draft to Malta sailing from Tilbury on a troop carrying aircraft carrier HMS Fencer en route to the Far East.

The old hanger decks had been converted into hundreds of three tier bunks.

Luckily, being a radar operator I was made temporary ships company which made the trip a little less boring. 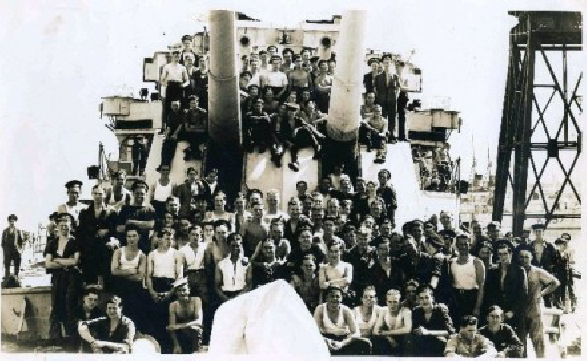 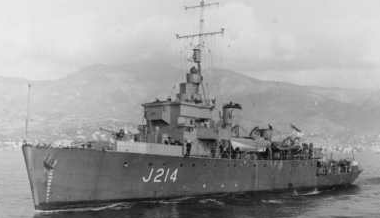 We cleared the area of mines and steamed our way back to Malta learning that we were to pay off in Chatham. Calling at Gibraltar we all loaded up with bananas and were given the task of towing a trawler back to the UK. Due to a storm brewing in the Bay of Biscay we had to put into La Corunna (Spain) for shelter. Whilst there our Coxswain dived into the harbour to rescue the local Mayor’s daughter who had fallen/jumped astern of the ship (and that reminds me she still has my towel). He was later presented with a very nice leather compendium. After paying off in Chatham it was back to Collingwood waiting for demobilisation which occurred on 3 June 1946, and I was finally released in Class A on 18 September 1946.